Using Kefir Instead of Milk 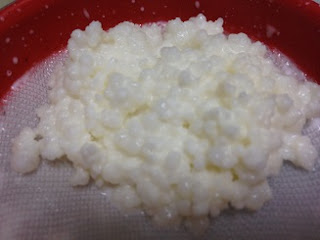 So, someone gave me some kefir grains and tibicos the other day and I have been making my own fermented goodies. This morning, I wanted to whip up some pancakes and there wasn't any milk left. There was plenty of kefir in the fridge however, and I don't quite like water in my pancakes so I thought I'd try using kefir instead. I mean, it couldn't go wrong right? It's just a little more sour than regular milk and I have heard of sour milk being used in pancakes.

It certainly did pay off because the pancakes turned out absolutely yummy. It was just like any other pancake recipe except I replaced the milk with kefir in a 1:1 ratio.

If you're interested, you can learn how to make kefir here

I'm going to try having kefir in other pastries instead of milk and see how they turn out. It probably wouldn't do so well in the ones that milk is a large portion of, but it should be fine in small amounts.
Posted by Robolove at 06:21 No comments: